Gmail’s official blog has this announcement shouting it loud that Gmail now has Voice and Video chat(http://gmailblog.blogspot.com/2008/11/say-hello-to-gmail-voice-and-video-chat.html).

They are providing Voice and Video chat from within Gmail. I was thinking they would have made a breakthrough Flash Web Application as Flash natively supports webcam and audio/video streaming. However Google has done something odd(at least.. it looks odd to me.. seems the innovation drive is slowing down here). Last year Google acquired a Sweden based company : Marratech. Marratech was an e-meeting startup and now Google has come up with the plugin that seems the direct result of take over(source : http://www.techcrunch.com/2008/11/11/google-adds-voice-and-video-chat-to-gmail/).
So instead of a flash application, this one is a .Net Clickonce application(PLEASE CORRECT ME, IF I AM WRONG). I detest running any application on my laptop/desktop that comes from Google so I didn’t allow it to run. But when it was being downloaded, the dialogbox was the famous.. clickonce installer dialogbox. anyways..sooner or later some one from my circle will install it and I will come to know what it is all about. Google has been pretty quick when it comes to rolling out features to its userbase lately, as a result you can see the voice and video option in menu in the screenshot below. 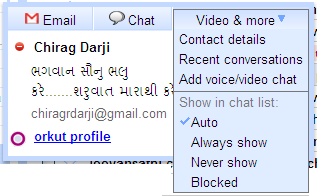 Also as amazing as it sounds and looks, I am not sure how well it will do in India sub-continent. Though bandwidth is comparatively better than previous years and we have decent processing power as well RAM to handle the overhead, I wonder will it be sufficient for this kind of usage or not?… only time will tell.. till then… bbbyye…